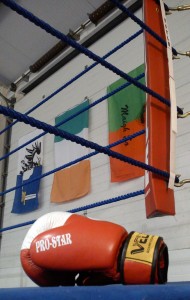 Long serving members of Swinford boxing Club Johnny Geraghty and Tommy Byrne summed up last night at the Conway Gym and Fitness centre in the best way possible, when saying that it had been “a long time since the club had lined out such a large and promising team”. Indeed memories of the glory days of the late 80’s and early 90’s came flooding back for many, when 20 Swinford boxers lined out for Róisin Tansey in front of a capacity crowd.

Commitment to the cause was clearly evident in the large attendance and the efforts over the past 5 months were duly vindicated when the club’s up and coming boxing stars proved that the future is bright for Swinford boxing.

The nights action began with an action packed exhibition between Erin McHugh of Swinford and Aoife Heraty of Ballinrobe. McHugh was on the front foot from the off but Heraty stood firm in what was a keenly contested exhibition.

Sean McDonagh showed his style in exhibition number 2. Jason Butler of Ballinrobe, son of club coach James Butler provided the opposition, and exhibited the skills that will no doubt make both Sean McDonagh and Jason Butler names to watch in the future.

Next into the ring for Swinford was Nicole Spain. Nicole joined the club earlier this year and has displayed the kind of potential that has seen her in the ring with the more experienced boxers in the county. Nicole’s opposition last night came in the form of Aoibhe Ginty of Geesela, sister of Ciara, national champion and Irish international. Both Aoibhe and Nicole displayed the qualities last night which may one day see them follow in Ciara’s footsteps.

Aidan Breen and Stephen O Connor of Ballinrobe served up an entertaining exhibition in bout 4. No ground was given and this exhibition was fought mainly in the middle of the ring with neither boxer willing to take a step back.

Aoife “it’s all about the money” Bredican was next into the ring to represent Swinford. As has become expected of Aoife, she boxed with the class of a lady far beyond her years, and along with her opponent Erin Bnnett of Geesala, served up one of the most skilful exhibitions of the evening.

It was no surprise that Dylan Toner and Mark Conway of Ballinrobe was a keenly contested exhibition. Dylan in a contradiction of terms is an “experienced novice” and not unaccustomed to the ring. In one of his many exhibitions this year Dylan and indeed Mark Conway contested a high class exhibition of boxing.

In exhibition 7, Sean McSharry and Evan Heraty exhibited their talents over three rounds of competitive boxing, in what was Sean’s best display of the season. Sean struggled with illness over the Christmas period and is only now showing the signs of full recovery to top form.

The next exhibition of the evening saw Molly Rowley make her debut for Swinford boxing club. Being a sister of Connacht Champion Jack, big things were expected of Molly and she didn’t disappoint, showing signs that she is one to watch for the future against Ella McDonagh of Geesala boxing club.

Dylan Kelly also made his debut in the Swinford colours against Liam Donaghue of Geesala. Dylan was delighted to discover last week that he was part of last night’s bill, and gave it everything is performance which will see him on many more bills before the years is out.

In one of the exhibitions of the night Danielle Brennan, making her debut for the club went toe to toe with Leah McDonagh of Geesala. Leah is no stranger to Swinford opponents having boxed regularly with Aoife Bredican. It was more of the same yesterday when she met Danielle in the centre of the ring. Danielle boxing off the front foot from the off applied immense pressure and displayed the type of skills of a future champion.

After a short break to catch our breaths, it was “as you left off” with Conor Joyce and Finn McDonagh entering the ring. Perhaps the slightest of our exponents last night but certainly ones who left a lasting impression. Comments from those in the know, say that Conor provides a reminder of past champions in the making, something which he will now be expected to live up to…displaying an “Ali style” shuffle last night, he might just have the stuff to do it too.

Saoirse Breen was her usual formidable self in her exhibition with Tara Ducey of Geesala. Saoirse using her big left jab keep Tara at arm’s length and pushing forward at every chance.

Jordan Moran was next into the ring for Swinford in a competitive exhibition with Padraig Joyce of Ballinrobe. Jordan making his debut struggled to get to grips with his opponent in an even round one, but after the break between rounds 1 and 2, must have listened to his corner, as he came out in rounds 2 and 3 like a new man landing jab after jab and displaying the potential which could see him take part in next year’s championships.

Shane McHugh and Calvin Flannery of Ballinrobe BC fought out a keenly contested exhibition. Both boxers found success when on the front foot with Shane getting the better of the long range encounters with his height and reach advantage.

In exhibition 15 Saoirse Oliver made history in joining the father daughter combinations to have fought for the club, when she met Aoibhe Ginty of Geesala. Ginty’s reach proved difficult for Saoirse, but Saoirse’s aggression made this a keenly contested exhibition.

Paddy Moore renewed acquaintances with Patrick Fury of Ballinrobe in exhibition 16. These two lads had fought earlier in the year and as always turned on the style to entertain the large crowd.

Making her debut for the club in exhibition 17 was Shawna Henry. In what could be only described as a battle royal both Shawna and her opponent Aoibhe Carrabine of Geesala BC served up three full rounds of top class entertainment, neither willing to give ground. Every round saw both ladies willing to trade in the middle of the ring, showing heart that cannot be taught.

One of the most improved boxers in the club, Liam McSharry, was next to represent the club. Liam was in against a familiar face in Mikey Crowe of Ballinrobe and as always it was a classy affair. Both boxers came to display their skills, Liam with long shots to the head and Mikey Crowe with shots to the body. Liam can be happy with his performance which was telling of the training he has been putting in all year. Liam is a prime example of what can be done when one is willing to put in the work!

In one of the finest exhibitions of the evening, Amanda Walsh made her debut against current Irish Champion Tara Barrett. Such was the clubs confidence in Amanda that this exhibition took place. In a bout which the large crowd in attendance were off their feet for much of, Amanda showed talent far beyond her experience. Barrett commented afterwards that last night’s bout was “a better challenge than the Irish final”, testament indeed to Amanda Walsh’s performance.

In the final exhibition of the evening, Shane McDonnell made his comeback from injury against Darragh Feerick of Ballinrobe. Shane had been going well this season before a setback whilst playing handball in February forced him out of the Mayo Championships and effectively ended his season. Shane needed a confidence boosting performance last evening to get back on track for the remainder of the season and got what he needed in a keenly contested exhibition with Feerick.

On a night which couldn’t have gone any better, the club thanked friends from Ballinrobe and Geesala for travelling, the large crowd for attending and everyone who had helped out, to contribute to a worthy cause. The club wished Róisín, her family and friends the very best and committed to helping out in any way possible.