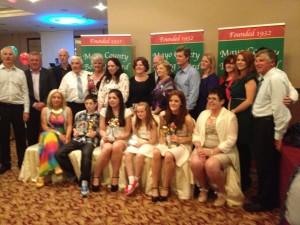 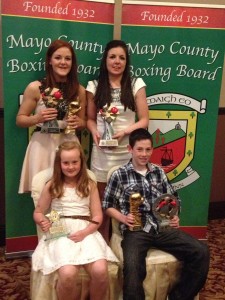 After a superb first year in boxing, which included an appearance on the Katie Taylor, “Road to Rio” bill, Aoife Bredican scooped the Best Female newcomer award.

Jack Kavanagh was rewarded for another tough season’s boxing with two awards. Having contested 19 bouts this season Jack picked up the Most Active Male boxer award, along with the Best boxer of the Connacht Championships, after two great performances en route to capturing his second Connacht title.

Ciara Sheedy added to her growing trophy collection with two awards on the night. Ciara was honoured for her two National titles along with the Most Active Female boxer award.

After an eventful year, which included two Irish International appearances and a fourth Irish title, Aoife Hennigan was honoured for the third successive year, for her performances in capturing the National U21 title.

The large Swinford attendance on the night, enjoyed a great evening’s entertainment, alongside the recognition for four of it’s boxers. Celebrations went well into the early hours of the morning at the Ballina venue.