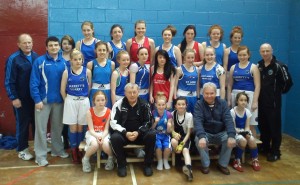 The three and a half hour journey by team coach to Carndonagh had no negative effect on the Mayo ladies, as each and every boxer set a standard that would grace any stage.

Donegal lined out no fewer than 7 current Irish title holders for the event, but even given that fact ,they could not stop Mayo from taking the inter-county by the slenderest of margins, 7 bouts to 6, and who better to tip the scales in Mayo’s favour in the final contest of the evening, but Ciara Sheedy.

Ciara defeated Carndonagh’s own Irish Champion, Rosemary Doherty in a full blooded affair. Full report on the day to follow.