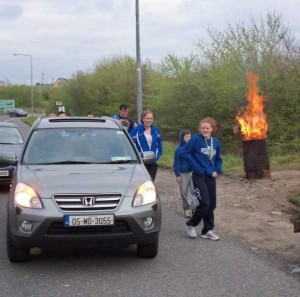 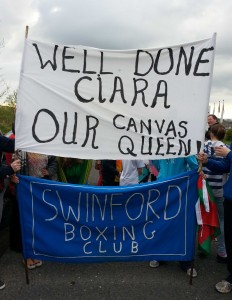 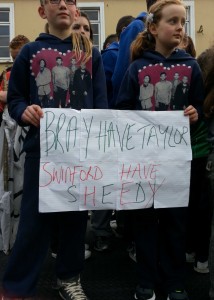 Fresh from her success at the National Championships, Ciara Sheedy arrived home to Swinford last evening to a joyous reception. Crowds from the community of Swinford and surrounds turned out to greet Swinford Boxing Club’s 15th National champion.

A large bonfire organised by Martin Loftus blazed into the evening sky, and cars lined the Dubin Road entrance to the town. Many of those who turned out had been busy designing banners, some of which read “Bray have Taylor, Swinford have Sheedy” and “Ciara Sheedy – Canvas Queen”. Swinford and Mayo flags lined the way as a cavalcade of cars made its way through Main Street and Market Street, before stopping at a stage which had been kindly organised and erected by Dee Fahey and Kelly’s Garage outside of Spain’s, who had their public address system ready to go.

The club welcomed Swinford’s National Champion Ciara Sheedy to the stage to rapturous applause, where Ciara thanked her family, Swinford Boxing Club, those who had travelled to Dublin in support of her and all of those who had turned out to welcome her back to Swinford.

The club thanked Ciara for her dedication and hard work in achieving her goal, and also thanked those who had travelled to Dublin in support of Ciara along with those who had turned out to welcome Ciara back to Swinford.
In keeping with tradition, Johnny Geraghty and Tommy Byrne presented Ciara with her own Swinford Boxing Club red and blue jerseys in honour of her achievement.

Celebrations then moved to the Whitehouse Bar and Lounge where Ciara’s final was replayed for everyone to view. Rita and Shane from the Whitehouse looked after everyone with food and drinks and the celebrations went long into the evening. It was great to see everyone out in support of Ciara and of the club and nice to take a break and relax after a weekend of exploits in Dublin.

Thanks to everyone from the club back at base for organising the homecoming, it wasn’t easy keeping it from Ciara!