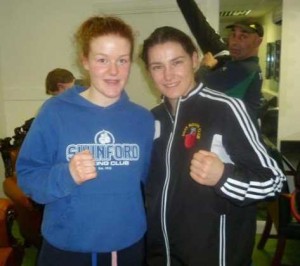 Ciara Sheedy will begin her quest for National glory this Friday as she weighs in for the Irish Ladies Boxing Finals, at the National Stadium on the South Circular road.

Narrowly defeated in last years final, Ciara overturned that decision in a Claremorris show earlier in the season and has continued to push on from there. Ciara’s improvement in that short time has been nothing short of phenomenal and it continues week on week, with her perfromance of the year coming last weekend in Westport.

Details from the weigh in and draw on Friday will be posted on this website, so keep in touch with the action. We wish Ciara all the best as she bids to become the next in a long line of Swinford, Irish Boxing Champions, and fufil the promise she has shown all season.